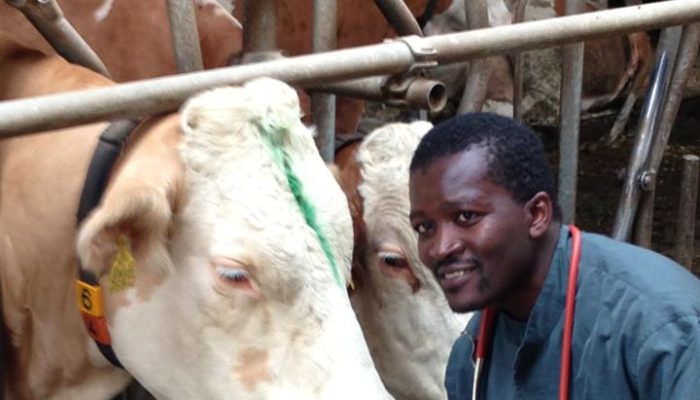 Some people give up a lot in order to realize their dream of becoming a veterinarian. So did Dr. Hamed Coulibaly, who left his family and home country in Africa many years ago in order to study veterinary medicine in Germany. Now he is a practicing veterinarian and owns a practice for cattle and new & old world camelids in Bad Tölz, Upper Bavaria. We interviewed him about his experiences as a foreigner during his studies and his career.

Mr. Coulibaly: I came to Germany with the aim of studying veterinary medicine here. I had already done basic studies in my home country for three years, but veterinary medicine is not offered as a field of study. This is only possible at a private university in Senegal. I decided to move to Germany because my brother had already been living here. I studied German for several months at a language institute and had to pass a language test in order to be accepted to a German university.

Mr. Coulibaly: No, it wasn´t difficult at all to get into the university. This is because a a certain number of places are reserved for foreign students. These are not offered by the central department, so I had to apply directly to the university. Since very few foreigners come to Germany in order to study veterinary medicine, I got into the program quickly. In order to improve my German, I studied Chemistry for one semester until I started the veterinary program.

Mr. Coulibaly: No, for the whole duration of my studies I didn´t have any negative experiences because of my nationality or skin color. I only experienced xenophobic behavior in private life.

Mr. Coulibaly: Indeed it was the case that the professors knew me and that most of them were very impressed that I spoke German so well and that I had come to Germany in order to study veterinary medicine. This support and respect helped me a lot during my studies.

Mr. Coulibaly: That goes back to my childhood. I grew up with animals and when my father retired he ran a cattle farm. I was always very interested in his work and since childhood I wanted to work with cattle as a veterinarian and help my father with his farm. The medical part was always the most appealing to me.

Mr. Coulibaly: No, I didn´t have disadvantages and was hired right away when I first applied for a job. My employers also didn´t have any concerns that the farmers could react negatively to me.

Mr. Coulibaly: I didn´t hear negative statements, but the farmers/clients first were sure skeptical. But they only told me this in later conversations. When they noticed that I was able to speak German well, they were always positively surprised and able to drop their mistrust.

Mr. Coulibaly: Yes, I actually wasn´t planning on staying here in Germany but wanted to return after my studies and help my family. Now I´m professionally and privately tied to Germany, but I´m definitely still planning on returning to the Ivory Coast once retired for at least a part of the year. I want to help people in my home country and impart my knowledge to the farmers there.

Mr. Coulibaly: Yes, for sure!

We thank Mr. Coulibaly warmly for the interview!

This interview was held by Tonia Olson.

I am very enthusiastic about my first month as an MOD Secretary... Becoming an IVSA Secretary…

IVSA master of coins and his two cents

Hello everyone! This is your favourite Treasurer speaking. Since the last time we got in…